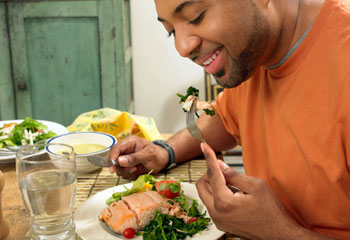 I’m not going to plug the high protein diet as the surest path to weight loss (although some say it is). But I do want to pass on the news that going on a high protein diet may be a path to better sleep, especially in people who are overweight or obese.

This is not just the conclusion of single study, which may or may not hold up over time. Rather, a protein–sleep connection has been documented in a handful of recent studies. If you’ve got insomnia and can afford to lose a few pounds, consider these results.

A Link Between Protein Consumption and Sleep Quality

Two studies were conducted by nutritionists at Purdue University. In a pilot study, they enrolled 14 overweight men and women, average age 56. Participants went on low calorie diets for 12 weeks. The percent of calories from protein in their daily diet varied in 4-week periods: either 10%, 20%, or 30%, in random order.

The upshot: Diets higher in protein significantly improved sleep quality (as measured by scores on the Pittsburgh Sleep Quality Index) regardless of whether the main source of protein was beef and pork or soy and legumes.

A total of 44 overweight men and women, average age 52, participated in the second study. Again, all participants went on low calorie diets. But this time, about half ate meals containing a typical amount of protein (the control subjects). Meals consumed by the other half were about twice as high in protein. At the beginning of the study, the sleep quality of both groups (as measured on the Pittsburgh Sleep Quality Index) was the same.

The upshot: By the end of this 16-week study, the group eating the protein-rich diet reported significantly better sleep quality than the controls.

The researchers conclude that “the consumption of a greater proportion of energy from protein while dieting may improve sleep in overweight and obese adults.”

A Quick Look at Sleep and Protein in Other Research

Other researchers have found a link between protein consumption and sleep.

Authors of a Korean study analyzed data from over 14,000 subjects ages 20–79 to see if dietary factors modified the association between sleep duration and obesity. The results showed that sleep duration correlated positively with protein consumption and negatively with carbohydrate consumption.

So along with weight loss here’s another reason to avoid pasta and fill up on fish: it might help you sleep longer.

College students were the focus of yet another study, this one looking at how dietary factors and psychological distress predicted sleep quality. Food choices that reduced the odds of poor sleep quality were

Once again, protein consumption is linked to better sleep.

The specific relationship between protein consumption and the sleep of people with insomnia has yet to be studied. But if you can afford to lose a few pounds and want to improve your sleep, try bumping up the protein and cutting back on carbs.

But make sure it’s healthy protein and not the bad stuff. Complete proteins, which contain all essential amino acids, are abundant in these foods:

Incomplete proteins, which come from non-animal sources, are healthy choices, too:

If these are your main sources of protein, take care to eat them in combination with supplementary protein. Not just beans, but rather beans and brown rice.

Protein sources to avoid are fatty and processed meats such as bacon, sausage, deli meats, and hotdogs.