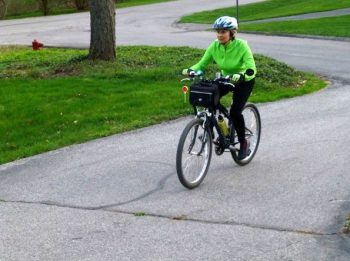 Me, returning from my first bike ride this year

You may have been a couch potato for most of your life, but now, if you’re middle-aged and envisioning a healthy retirement, you’d better change your ways.

Moderate-to-vigorous exercise can mitigate some effects of aging, including poor sleep quality and cognitive decline. Research generally supports this claim, so especially if you’re prone to insomnia, you’ll want to check this out.

Sleep tends to be less robust as we age. Middle-aged and older adults get less deep sleep (the restorative stuff) than younger people. Our sleep is less efficient, too, peppered with wake-ups during the night. In the morning, we wake up feeling less rested, with fewer resources to meet the demands of the day.

Investigators are now looking at lifestyle factors that might alleviate aged-related sleep problems. A majority of studies suggest that both male and female exercisers tend to experience better sleep quality and fall asleep more quickly than people who don’t exercise.

The majority of such studies are based on reports from participants rather than objective tests. In two more recent studies, investigators used objective measures to assess the relationship between participants’ level of physical activity and their sleep.

The SWAN Sleep Study was an observational study involving 339 middle-aged women. Over 6 years, investigators collected data on their activity level in three domains: (1) Active Living (activities like watching TV and walking to work), (2) Household/Caregiving (housework and childcare), and (3) Sports/Exercise (recreational activities and sports).

Toward the end of the 6-year period, the women underwent in-home polysomnography (a sleep study) every night during one entire menstrual cycle or 35 days, whichever was shorter. They also kept sleep diaries and filled out sleep-related questionnaires.

Altogether this made for a lot of data on a lot of women. The findings reported here are both significant and clinically important:

Routine exercise has similar benefits for men, a small exercise intervention study showed. Via polysomnography, the sleep of 13 men aged 60 to 67 was assessed 3 nights before and 3 nights after they participated in a 16-week exercise program. The program consisted of regular 60-minute workouts on the treadmill. The workouts were fairly rigorous and the results, impressive. Compared with their sleep before starting the exercise program, by the end of the program the men’s sleep

If the sleep benefits of exercise don’t move you to action, maybe the high cost of inactivity to your brain will. Regular exercise helps improve cognitive function and protects against cognitive decline. How it does so has yet to be worked out, but one theory holds that exercise has a beneficial effect on the brain due to its positive effect on cerebral blood flow. For optimal functioning the brain has to have adequate blood flow. Moderate-intensity exercise increases blood flow to the brain in healthy adults.

Protecting vascular health—which typically declines with age—may also protect against cognitive decline. Barnes cites a few studies that suggest that exercise is the key to protecting vascular functioning. A few other human studies show that both aerobic exercise and strength training help maintain cognitive fitness. In addition, animal studies have shown that sustained aerobic exercise promotes the growth of new nerve cells in the hippocampus, a part of the brain associated with memory.

So particularly if you’re middle aged or older and prone to inactivity, check into starting an exercise program now. It will improve your physical and mental health and—perhaps more relevant if you’re looking for help with insomnia—it will likely improve your sleep. 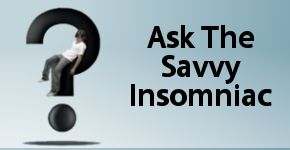 Do you have trouble falling asleep or staying asleep? Have you tried insomnia remedies and found that nothing worked? If you’d like to chat one-on-one with Lois Maharg, Click Here.